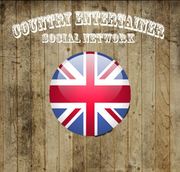 Now we know that you love Country Music in the UK so here is your chance to let us  know how much you love it.

Hi I'm Amanda wow I have been lucky enough last weekend to have been at the C2C festval at the O2 arena in London.  British Country fans turned out in their thousands to see American and British top country stars.  C2C has become THE major event on the British country music calendar.  It was played this year over 2 nights where country music headliners came together in one place for one weekend.

This years line up included Kip Moore, Brantley Gilbert, Lady Antebellum, Brandy Clark, Jason Aldean, Lee Ann Womack, Florida Georgia Line and Luke Bryan.  Also some great acts on the pop up stages including The Shires who have currently entered the mainstream charts in the UK at No 10 congrats to them.

The show was played also in Dublin, Oslo and Stokholm and went out live on British radio station Radio 2 country.  With the dates already announced for 2016 going out 3 nights on 11, 12 and 13 March tickets are sure to be popular.

Did anyone else out there also go if so what did you think of it let us all know guys!!!

anyone go what did you think?Continue

You need to be a member of Country Music UK to add comments!